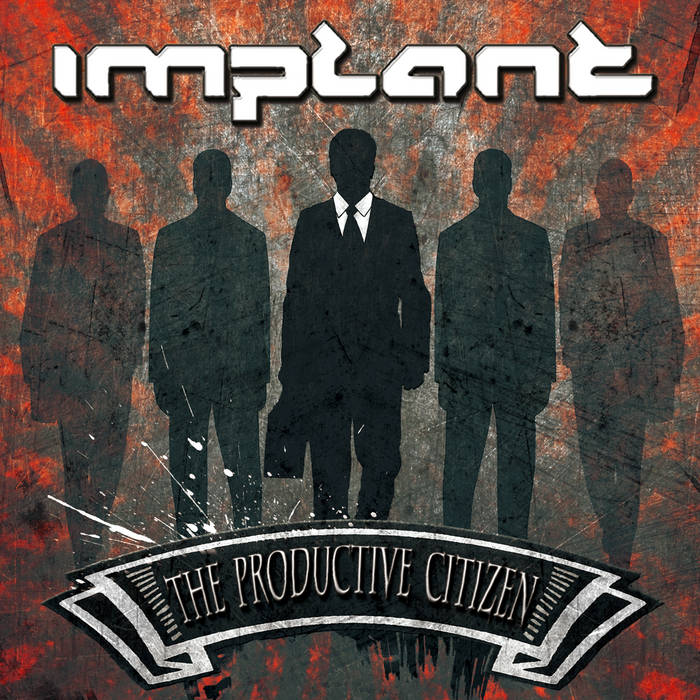 Haven't we all been there? Before you can even think of breathing again, you are already facing another panic deadline, working late into the night on that new last-minute, super urgent, top priority report for your boss who will not even thank you. Deliver, deliver, deliver... That increasing feeling of stress and pressure. Run, run, run... Non-stop scrambling on the hamster wheel to become the perfect productive citizen!

While you all have been scrutinised, scanned and watched, IMPLANT turned their back to that world of immediate action and rapid turnaround and opted for a studio lock-out at the Implant Plant, blocking all contacts with and from that invasive outside world. "The Productive Citizen", the Belgian duo's new album deals with the contemporary topics of social pressure, decreasing privacy and tuning into the rhythm of people we will never ever meet... A new CD offering IMPLANT the perfect medium using music to take a stand and kick against the pricks.

While their fanbase polls reported a sharp increase in expectations month after month, IMPLANT resisted to the time pressure of speed execution and focused on detailed quality production and refinement giving them the ultimate good feeling of being good productive citizens who chose to revolt against the biodigital nightmare. Loud and catchy, fast and moody, distorted and melodic, IMPLANT offer 12 new tracks jumping from harsh EBM to industrial pop through goa trance. Pure electronic music mixing old school roots and modern tones with strong and carrying vocals including special guest appearance of LEAETHER STRIP, KRYSTAL SYSTEM or yet XMH. Go and grab that new record, faster, faster... Enjoy the sound of the big machine!!! Harder, louder... Log-in or log-out?

And if you are productive enough to be on IMPLANT's special guest list and decided to buy the album from the Alfa Matrix e-shop or during IMPLANT concerts, your carton box will also include the remix extravaganza "Increased Productivity" album with 14 more exclusive remixes by AMBASSADOR21, AESTHETISCHE, KANT KINO, AD:KEY, XMH, MARI CHROME, HEZZEL, etc.

New sounds from Mavi, Ivy Sole & Moderator, plus AJ, the One joins the show, for her latest release